You are here:
Mocks 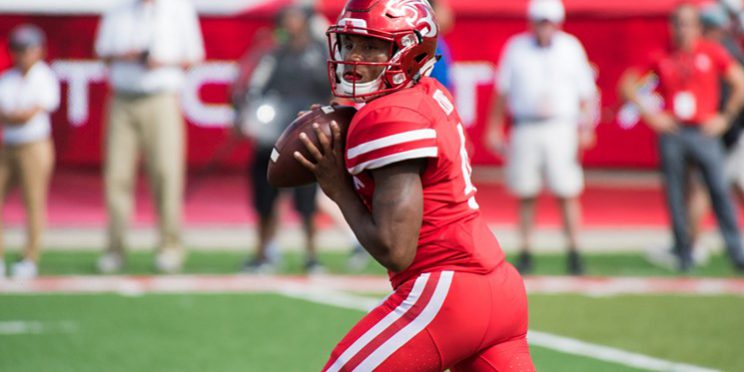 CFBDynasty ran an automated 16 team College Fantasy Football draft to get a rundown of how people will draft straight out of a magazine or straight down the Fantrax rankings. The purpose of this mock draft is to so that you can see the guys you would want to take early or the sleepers that you can wait on in the later rounds.

Right out of the gate we notice that QB’s were the hot topic early with 5 going in the 1st round and slowing down over the next few rounds. For those that checked out our article on Qb’s verses other positions will notice that the top 5 fantasy QB’s from last season averaged 10 PPG higher than the top 5 Rb’s from last season. If you are in the top half of the draft going QB might not be a bad idea to get your #1 option at the QB position out of the way early. There is the possibility of landing an elite QB late in the process however with the likes of Spencer Sanders going in the 14th round, Alan Bowman in the 14th round, Shane Buechele in the 12th round, and Khalil Tate and Trevor Lawrence in the 11th round.

Rb’s really started to take off in the 2nd round and continued into the 3rd with 11 going between the 2 rounds. Typically a really deep position to draft from in college so this comes to no surprise here. With players on the board like Hubbard, Moss, Jefferson, and Kelley in the 3rd round, it is easy to get a RB1 waiting in college fantasy drafts. Right out of the gates 2 players stand out in Pooka Williams going in the 7th round and JaTarvious Whitlow going in the 16th round. Williams will miss the 1st game due to suspension but is a legit threat once he comes back in week 2. Whitlow not going til the 16th round is even crazier considering CFBdynasty has them ranked in the top 25 of their positional rankings.

WR position really seemed to be a consistent pick with 4 going in each of the 1st four rounds. No real surprise with the top choices in Moore, Shenault, and Wallace. Jeudy and Proche could easily be 1st round choices as well so landing any of them would be a huge boost for your team. If RB goes early and you are in the 2nd half of the 1st round I would load up on the WR position to try and lock it down early. Going later in the draft that could be a potential sleeper are guys like Tamorrion Terry in the 8th round, TJ Vasher in the 8th round and Warren Jackson in the 6th round, Reggie Roberson in the 15th round and Sean Riley in the 14th round.

TE and Defenses definitely were a shocker a bit with 2 Def going in the 4th round and 1 TE going in the 6th round. DEF is typically not a position that you would draft in the first 10 rounds at least. Now, the Defenses that were taken, Alabama and Clemson, can make the case to be a legit contender and capable to put up several points fantasy wise as both look to be physically dominating again this year. TE is also a position were landing the TE that can put up WR2 numbers could be a nice boost for your championship run.

Personally I have never been a fan of taking my QB early in leagues. With so many college teams running uptempo or the dual threat options at the smaller schools, I personally do not feel the need to land that position in the 1st two rounds. My draft strategy is to either land 2 of the top 5 Rb’s or Wr’s  at their position to really try to get a leg up on the competition. I also try to pay attention to what others are drafting. If they are running down the rankings this means that they have not done their homework and are relying on Fantrax to provide accurate rankings and finding that sleeper late is huge. Reaching for a certain player can be a risk, however, if you really love a certain player, go get him. Not saying in the 1st few rounds, but if he is projected in say round 8 and you want him in the 6th round then I am personally a believer in this. Sometimes we just have a feeling about a certain player that we just can’t live without.