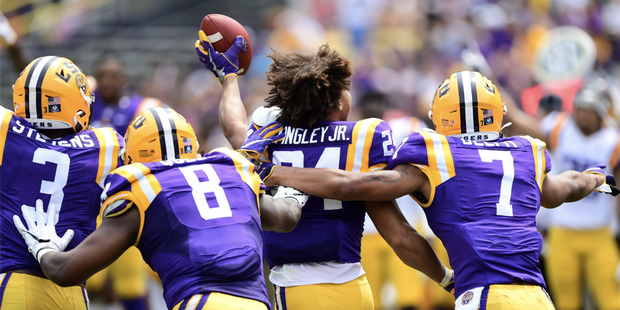 A major player in the SEC, we need to know more about how LSU is stacking up for the coming season. To bring you the most accurate info out there, we interviewed Brooks Kubena, LSU expert and writer covering LSU for The Advocate. He gave us the details on the RB workload, how he thinks the o-line will do this season and which players we can expect to see good things from in the future. Check out more from Kubena on Twitter @BKubena, and find out how his notes compare to ours on our rankings page.

Overall, how do you believe the offense will compare to the 2018 version?

LSU’s new passing coordinator, Joe Brady, said on the radio a few days ago that he keeps telling people to “get your popcorn ready” when it comes to LSU’s offense in 2019. He’s the guy that Ed Orgeron brought in to bring the Tigers into the modern era of college football offenses with the RPO schemes Brady learned as a GA at Penn State under Joe Moorhead and as an offensive assistant under Sean Payton with the New Orleans Saints.

Combining all that Brady’s mentors have said about him, plus when I got a chance to see him speak at the LSU coaching clinic in March, there’s no question that Brady is a highly intelligent football mind. LSU’s seen intelligent offensive minds come through its coaching staff over the past decade. What makes this different, in my opinion, is that LSU’s personnel is tailored quite favorably toward the RPO changes Brady will implement—most notably at quarterback, with Joe Burrow.

Burrow went from consistent everyman to Fiesta Bowl MVP over the course of the 2018 season, and having run the RPO in high school and at Ohio State before transferring to LSU, I think he’s got a great opportunity to thrive. He’s got the weapons around him. All the wide receivers are returning, and Justin Jefferson (the younger brother of former LSU players Jordan and Rickey) has the playmaking ability to make All-SEC next year.

The 2019 offense will finally use the four-wide, five-wide sets that were promised in 2018. We saw it in the LSU spring game already. And with more than just Myles Brennan behind Burrow (they only had two scholarship QB’s last season), we’ll get to see LSU open up Burrow’s wheels a little more. That, paired with the arrival of Top 10 running backs John Emery and Tyrion Davis-Price, LSU should be able to put up some points next season.

The popcorns not in my bowl just yet; but I’ve bought the packages.

What do you expect from the QB position in 2019?

I covered most of that in the first question, but I’ll add that Burrow went all the way until the Rice game last season before another quarterback, Brennan, took a snap. That was because Brennan was dealing with an injury that restricted his ability to throw, Orgeron would later say, and Orgeron has said throughout the offseason that he wants Brennan to play more often in 2019. I don’t think that at all means we’ll be seeing a two-quarterback system. Mostly that just means Brennan will be more available and more capable than he has been to relieve Burrow in late-game situations or if there needs to be a change made in the middle of a game.

That’s a very good question. Last season, Nick Brossette carried the workload. He had nearly 100 more carries than Clyde Edwards-Helaire, and they were both pretty effective in their roles. Now that Brossette’s gone, Edwards-Helaire has his chance at the spotlight. He once described himself as a scatback, but at 5-foot-9, 212-pounds, he’s much more than that. He’s a lot like Derrius Guice was—quick and fast, but he’s got the strength and power to run through tackles and will do it often.

But John Emery, the nation’s No. 1 running back by some recruiting rankings, didn’t come to LSU to ride the bench. He’ll get his carries for sure, and there’ll have to be something in store Chris Curry, a sophomore who had an outstanding performance in the spring game.

The good thing for LSU is that this new redshirt rule allows players to play in three games and still redshirt. That means Ty Davis-Price (No. 8 247Sports) can get some good playing time as well.

How does the offensive line compare to the 2018 group?

Offensive line was the biggest issue of 2018 for LSU. It wasn’t until Week 7 that the Tigers started the same offensive line combination as the week before. Injuries and inconsistencies were part of the problem. The 2019 season couldn’t be much worse as far as offensive line goes. In 2018, the Tigers finished 106th nationally with 35 sacks allowed. Two solid starters in center Lloyd Cushenberry and right guard Damien Lewis return, and starting left guard Saahdiq Charles improved over the course of the season. The big question marks are at left guard and right tackle. Kardell Thomas, the nation’s No. 4 OG recruit according to 247Sports, is expected to compete for playing time immediately at left, and if he turns out to be the pancake machine they expect him to be, he could be a good replacement for Garrett Brumfield. There’s a battle at right tackle between Austin Deculus, last year’s starter, and Badara Traore, who came in as a JUCO guy last year and didn’t transition as well as LSU coaches hoped. That position will be key for LSU’s pass protection issues. There does not yet seem to be an elite tackle on either side of the ball.

As is the norm at LSU, Joe Burrow will have plenty of options at wide receiver. Justin Jefferson was a go-to guy in 2018. But Ja’Marr Chase (313 yards, three touchdowns) and Terrace Marshall (192 yards) ought to get plenty more opportunities in the short-passing game that the RPO offense affords.

Incoming true freshmen Trey Palmer and Devonta Lee will have to break into the lineup; but I have to imagine that they’re skill will find their way onto the field in those early situations in the season.

Tight end’s the tricky one. Last year, injuries plagued the entire position with Jamal Pettigrew suffering a season-ending ACL tear and Thaddeus Moss (son of Hall of Famer Randy Moss) missing the season recovering from a foot injury. They’re all back, and JUCO TE T.K. McClendon joins the group, allowing offensive coordinator Steve Ensminger to use some of the double-tight end sets he is privy to use.

But in the spring game, we saw LSU split the tight ends out into the slot a few times, and sometimes that spot will be replaced with a fullback, we saw. So that’ll be an interesting tool if those guys stay healthy and perform well.

Derek Stingley will be the most dynamic player on LSU’s team. He’ll play cornerback, but the nation’s No. 1 recruit was a pick-six machine in high school, and he’ll return punts for the Tigers in 2019. Who knows what that guy will do when he gets the ball in his hands.

Mentioned Chase and Emery earlier. Those guys ought to have their breakout moments throughout the season.