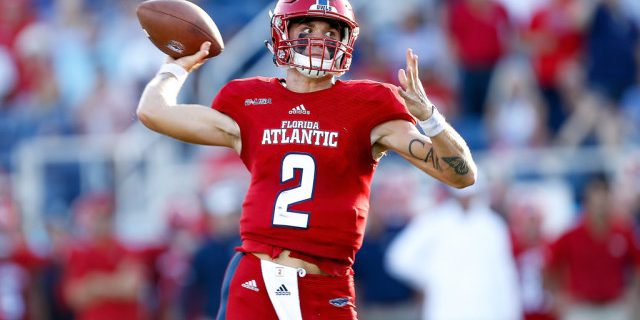 Deandre Francois’s offseason has been one that he will want to forget. In February, Willie Taggart dismissed him due to a litany of issues involving domestic violence with his girlfriend. After his freshman season he led the Seminoles to a 10-3 record and looked like a potential star. His career quickly got derailed due to a knee injury during the opening game of his sophomore season against Alabama. The injury knocked him out for all of the 2017 season and he’s never looked the same. During Taggart’s first season, Francois struggled fitting into the system with the new coaching staff. Francois originally announced he would transfer to FAU but now he is not expected to join the team. There were very few teams willing to take a chance on him due to his character issues but he is now expected to join the Hampton Pirates.

The QB competition at FAU is wide open for Chris Robison to take the lead with Francois not joining. He started 11 games for the Owls last season as a freshman but his inconsistent play will need to improve. Lane Kiffin will need Robison to make great strides into his sophomore season for them to have a successful season and remain atop the depth chart. He has flashed serious upside and was a highly touted recruit in high school but needs to improve his efficiency on the field and leadership skills off the field. While Robison is in the lead for the starting position he must prove his worth on the field against 2 transfers and a true freshman. Robison’s freshman season had moments of growth but, as the stats below show, he is too careless with the ball and need to clean up the turnovers.

Chris Robison is in prime position to be named starter for the Owls this upcoming season. Lane Kiffin needs much more productivity from Robison in his sophomore season for the team to have a better year. The Owls will be under pressure to win now after underperforming last year, and Lane Kiffin knows that. With expectations high Robison needs to perform at a higher level consistently to win games.

Robison is in a favorable situation with the starting job and a good coaching staff on his side. He is a player to keep watch of as the season begins due to his talent and upside but don’t rely on him too heavily as a consistent piece of your team.

Don’t overlook Nick Tronti, eligible after transferring from Indiana. This is a battle that will linger into the season.

Where to Watch Syracuse at Liberty Football Game
August 28, 2019