With uncertainty abounding the 2020 season, it can be tough to think so far ahead into the season. However, nothing seems to stop Dr. SEC – one of the conference’s most reliable sources for SEC news. And while the whole season runs the risk of getting axed, the show much go on for the Dr.! He’s come up with this Top 10 Breakout players for 2020! Let’s check ’em out. 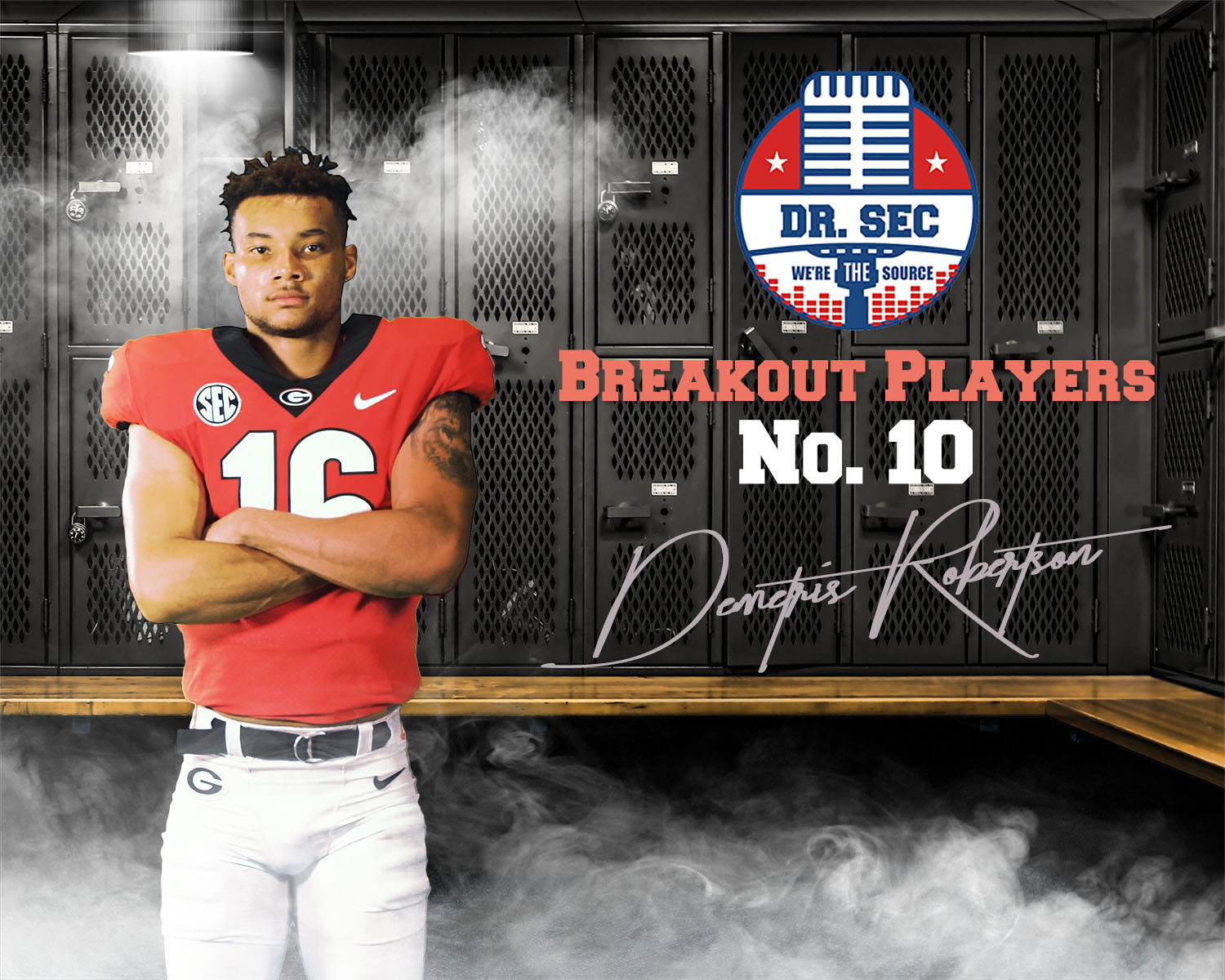 “Demetris Robertson arrived in Athens with big expectations after he hauled in 50 receptions for 767 yards and seven touchdowns as a freshman at the University of California. However, despite showing glimpses here and there, Demetris has not lived up to those lofty expectations placed on him at UGA.”

“The problem wasn’t his playmaking ability but opportunities. Although he has shined at times, he is never on the field long enough to sustain the momentum. The biggest reason is that the previous OC’s put more emphasis on run blocking than playmaking. With a new offensive coordinator, look for Demetris to get the kind of playing time needed to have an explosive season.”

“John Rhys Plumlee had a fantastic freshman season where he broke the Ole Miss freshman rushing record with 1,023 yards. He also broke the record for touchdowns by a freshman with 16 TDs (four passing, 12 rushing).”

“With all the success he had running the football, the passing game was anemic with Plumlee averaging only 101 passing yards per game. Despite the lack of production in the passing game, there are plenty of reasons that Ole Miss fans should be excited about Plumlee. However, none are more important than the addition of Lane Kiffin as the head coach.”

“Look for Plumlee to have a drop in his rushing numbers but a dramatic improvement in his passing numbers.” 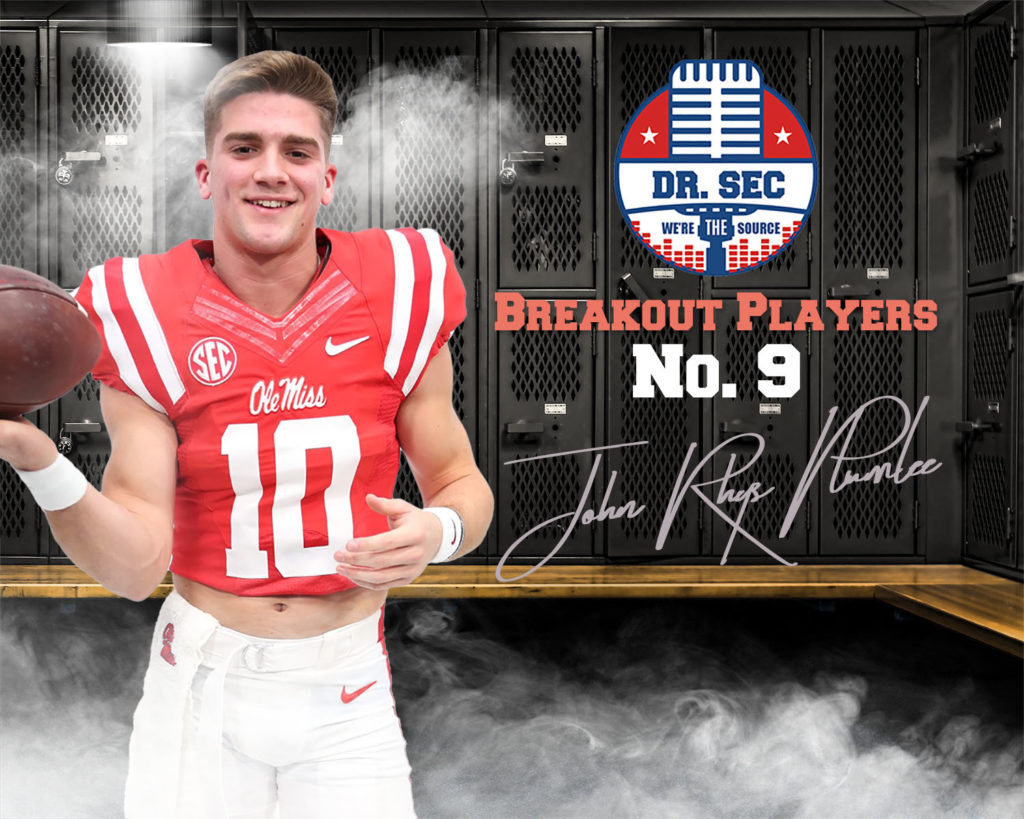 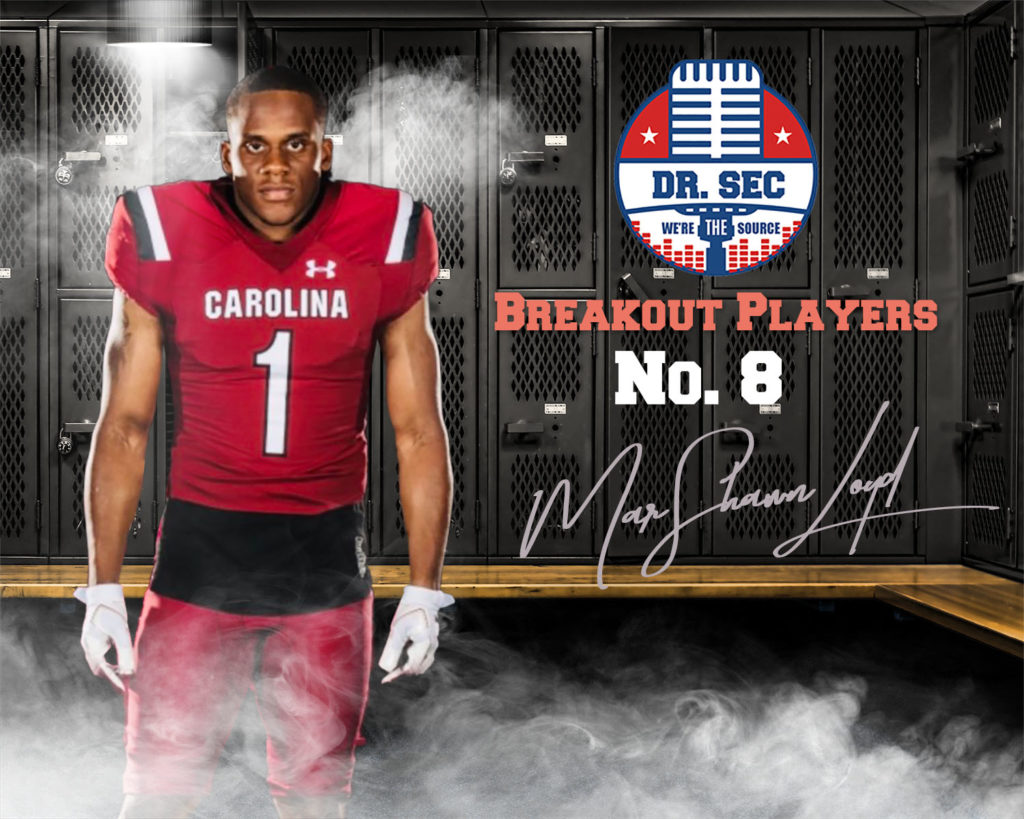 “I rarely add freshman players to my breakout players list, but MarShawn Lloyd is different. The Gamecocks have not had a 1000-yard rusher since 2013. Marshawn will break that streak within his first two seasons, if not this year. The Gamecocks have been in desperate need of an elite running back for several years but their wait is over. Here is my scouting report of MarShawn from last year:”

“MarShawn is a strong, sturdy, well-built runner with a lower center of gravity. He is one of the more complete and well-rounded backs in this class and has a college-ready decisive style that should make him able to contribute immediately at South Carolina.

“In the seven games leading up to his historic performance against Vanderbilt, Eric Gray had only had 42 yards rushing on 24 carries. He had a little success earlier in the season, but for the most part, wasn’t getting enough carries to find his groove as a runner. Then he was given 25 carries for 246 yards against Vanderbilt, and the rest could be history. He followed that up by winning the MVP of the TaxSlayer Gator Bowl.”

“I have bad news for the SEC, Jim Chaney has found his running back at Tennessee. With the news that Tim Jordan is no longer with the team, the future becomes even more apparent. Don’t make the mistake of dismissing senior Ty Chandler, who is hoping for a big season as well. Remember, Chaney is the only offensive coordinator in NCAA history to produce two running backs with 1,000 yards rushing on the same team in consecutive years. I am not saying they will match the production of Nick Chubb and Sony Michel or even Elijah Holyfield and D’Andre Swift, but it will be a special year for the duo.”

“I predict that both players will go over the 700-yard mark, and Gray will eclipse a 1000 total yards this season.” 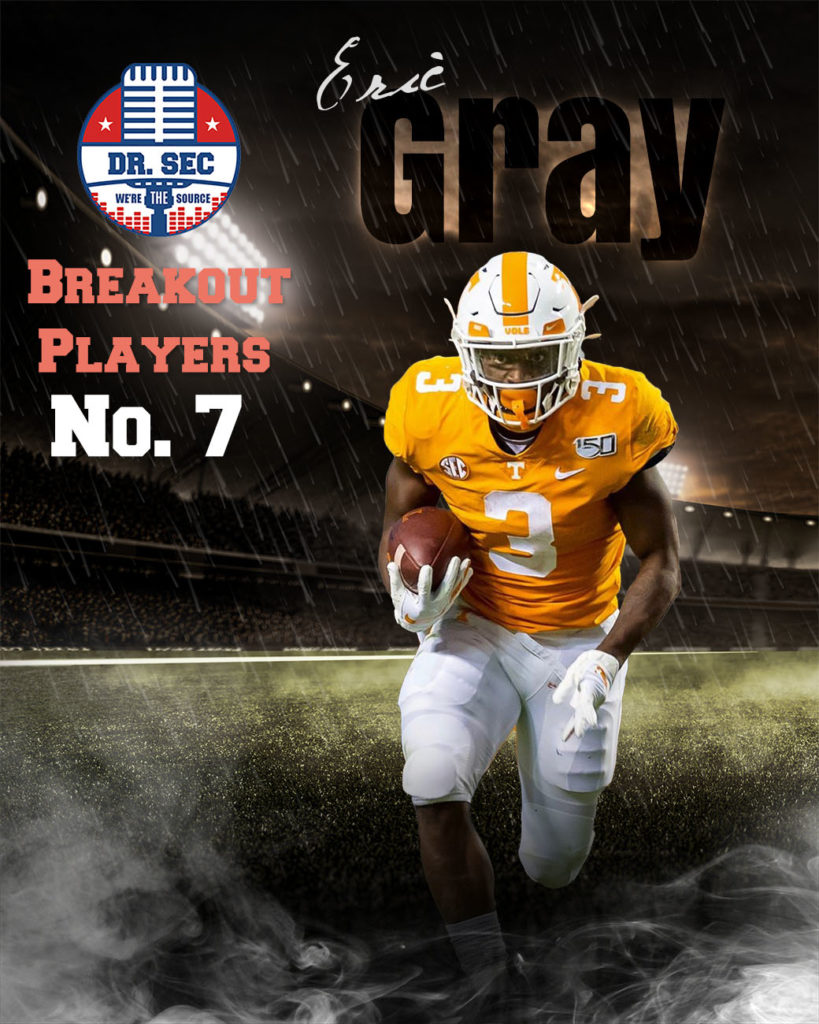 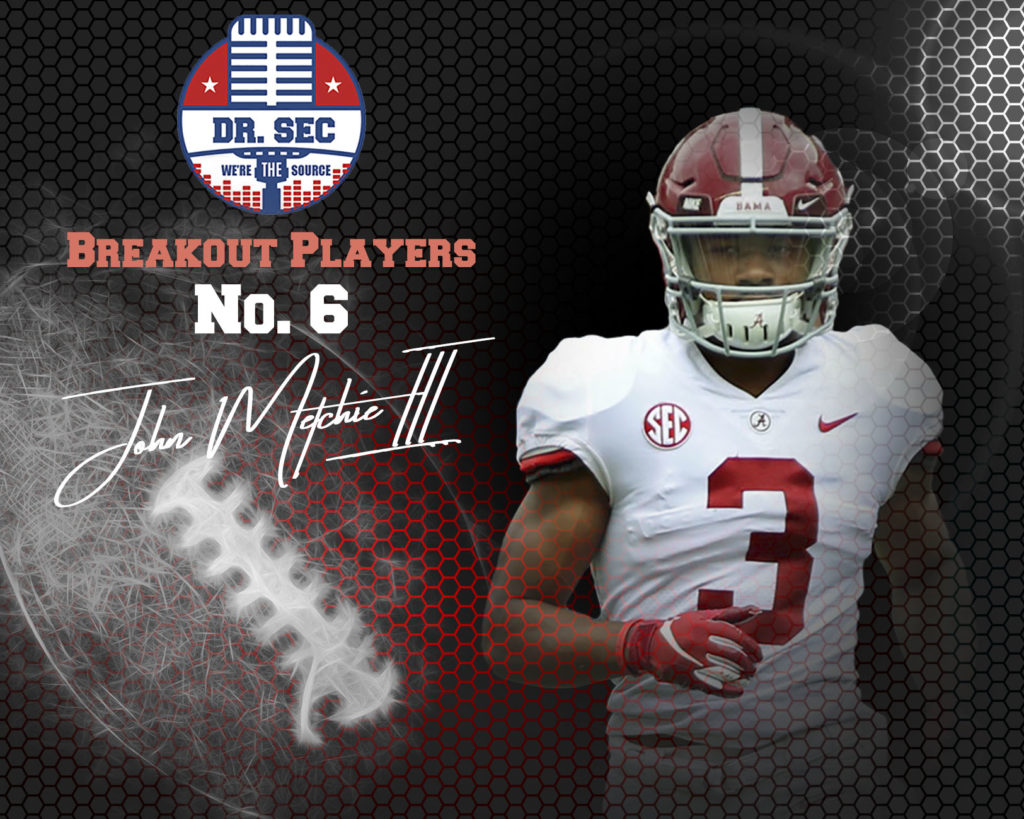 “Imagine winning the A-day game MVP, while leading all receivers, with five receptions for 133 yards and rarely touching the field the following season. That was the case for John Metchie III as he had to wait his turn behind one of the most prolific receiving corps in SEC history. With Jerry Jeudy and Henry Ruggs III drafted in the top 15 of the NFL draft, Metchie’s wait is over.”

“Most defenses will be focused on trying to slow DeVonta Smith and Jaylen Waddle down, which will give Metchie a chance to make immense contributions. While I expect to see a more substantial dose of Najee in the running game next season, but the Tide is still going to air it out.”

“Metchie will surpass the 800 yards receiving mark and eight touchdowns.”

“If you just looked at the stat sheet from last season for the former No. 1 player in the nation, it might feel a bit underwhelming. Nolan Smith did finish the season with 2.5 sacks and 18 total stops, but he did so much more. On a defense already loaded, he found a way to notch 15 quarterback hurries last season.”

“As good as the Dawgs were on defense last season, they struggled to get to the quarterback. The Bulldogs allowed the fewest points per game nationally (12.6) and the third-fewest yards per game (275.7). However, UGA’s pass rush was tied for 46th with just 31 sacks.”

“In their system, you need an exceptional athlete, and Smith is that guy.” 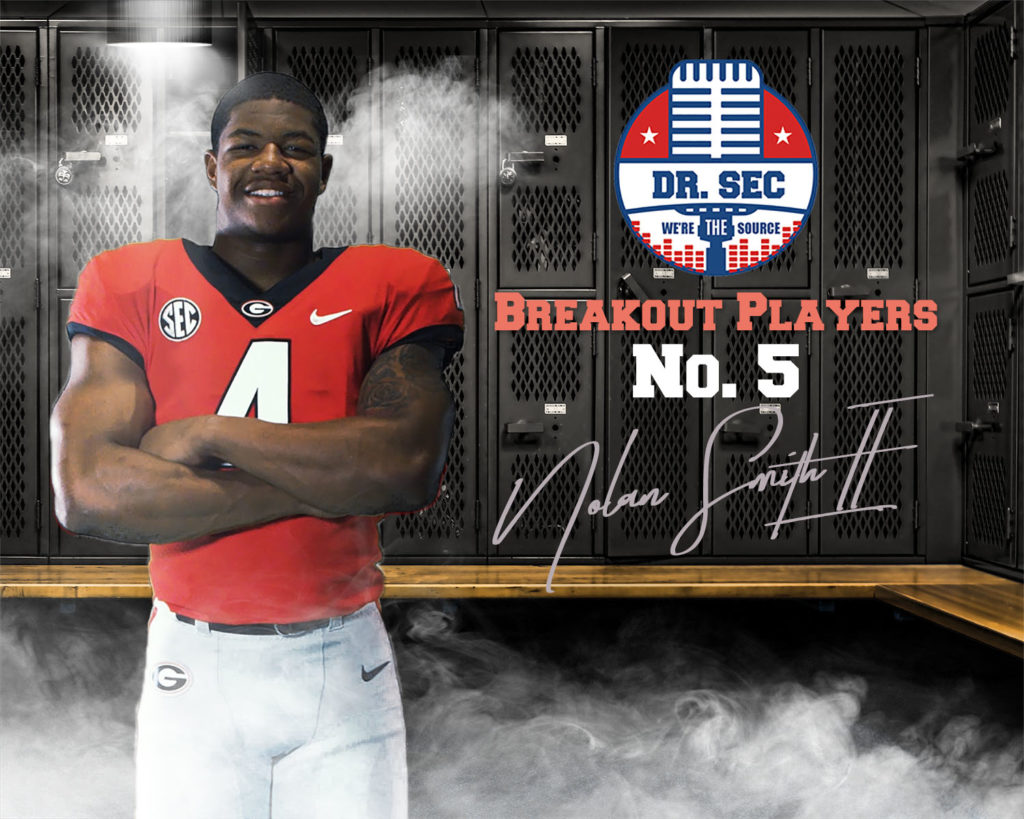 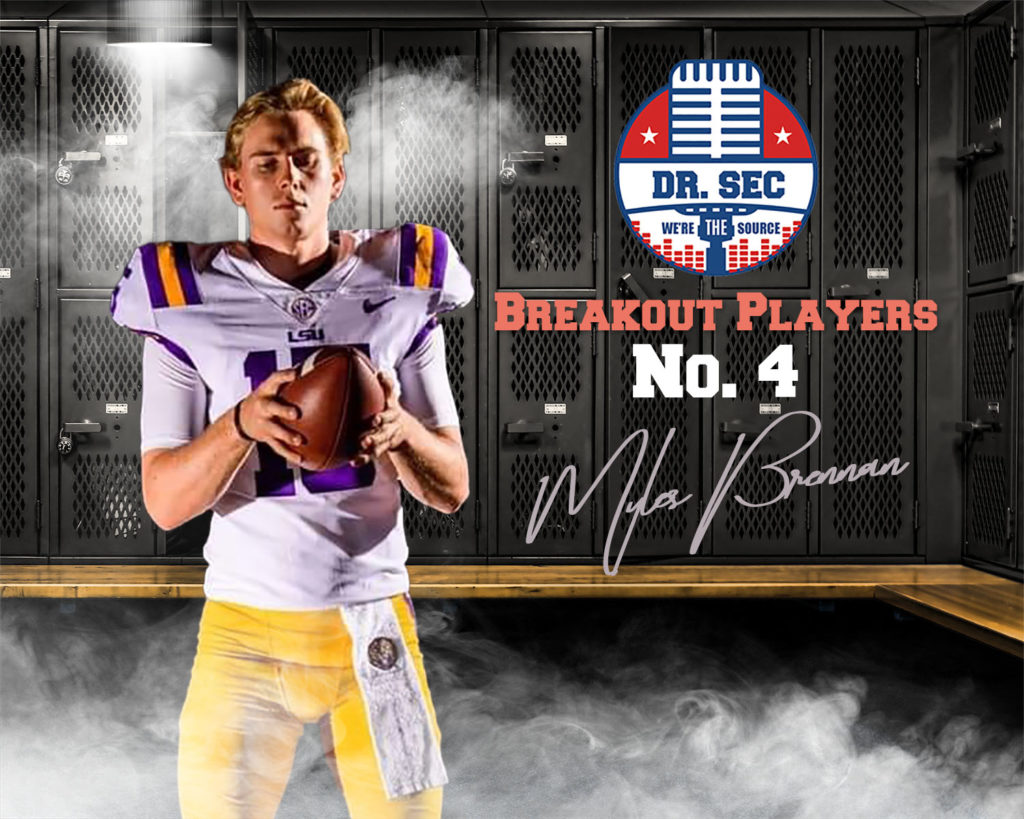 “Myles Brennan has waited his turn, and with a great stable of RB’s and one of the top WR duos in the nation, I expect no less than 3000-yards and 25 touchdowns.”

From Jordan Davidsen: Dr. SEC is absolutely right here. With Joe Burrow making the move to the league, the QB spot is wide open for LSU. Myles Brennan isn’t just a great player, he’s a player for one of the best teams in college football. No doubt he’s been paying attention to Burrow and getting to watch LSU’s success over the past few years and now can put his helmet on and put it in action.

“It is hard to put a quarterback with a 12-3 record as a starter, but the improvements you will see from Terry Wilson Jr. will be astonishing. Wilson completed 180 of 268 passes (67.2) with 11 TDs and eight interceptions in 2018. He also rushed for an additional 547 yards and four touchdowns.”

“Wilson appeared ready to take that next step in 2019 before suffering a season-ending injury in the Wildcats second game. All reports out of Lexington are not only us his rehab going well but also stronger and faster than ever.”

“The Kentucky Wildcats are once again under the radar, but they will not stay there very long.” 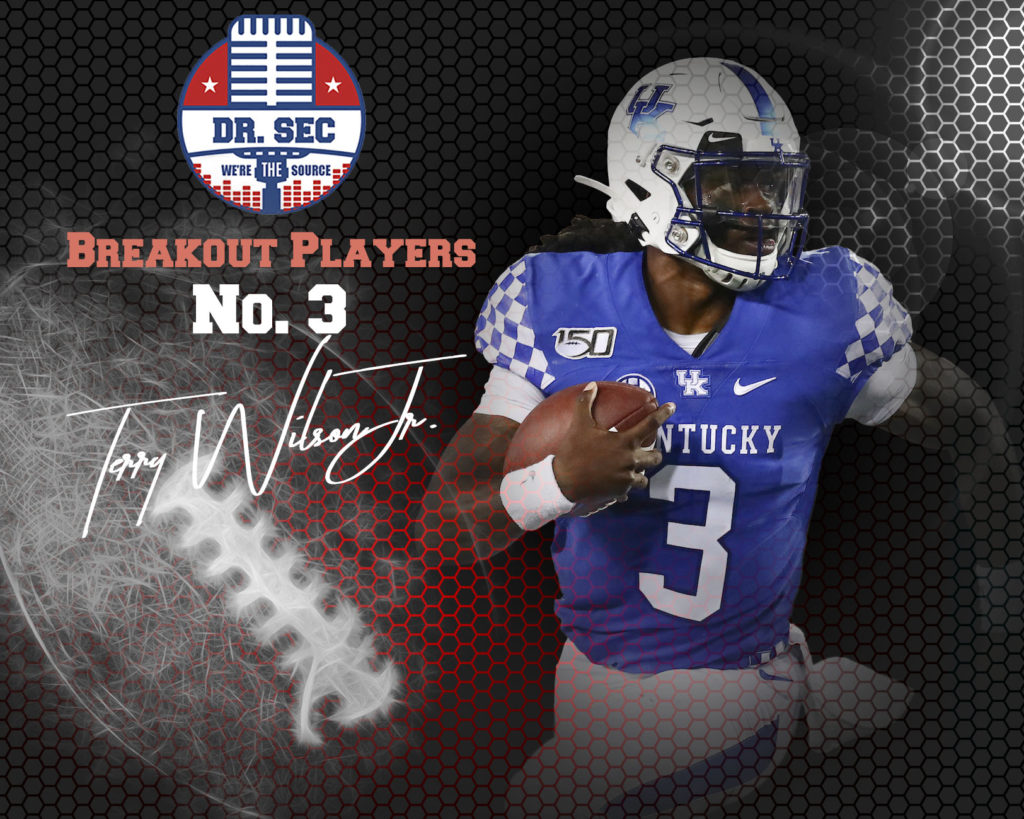 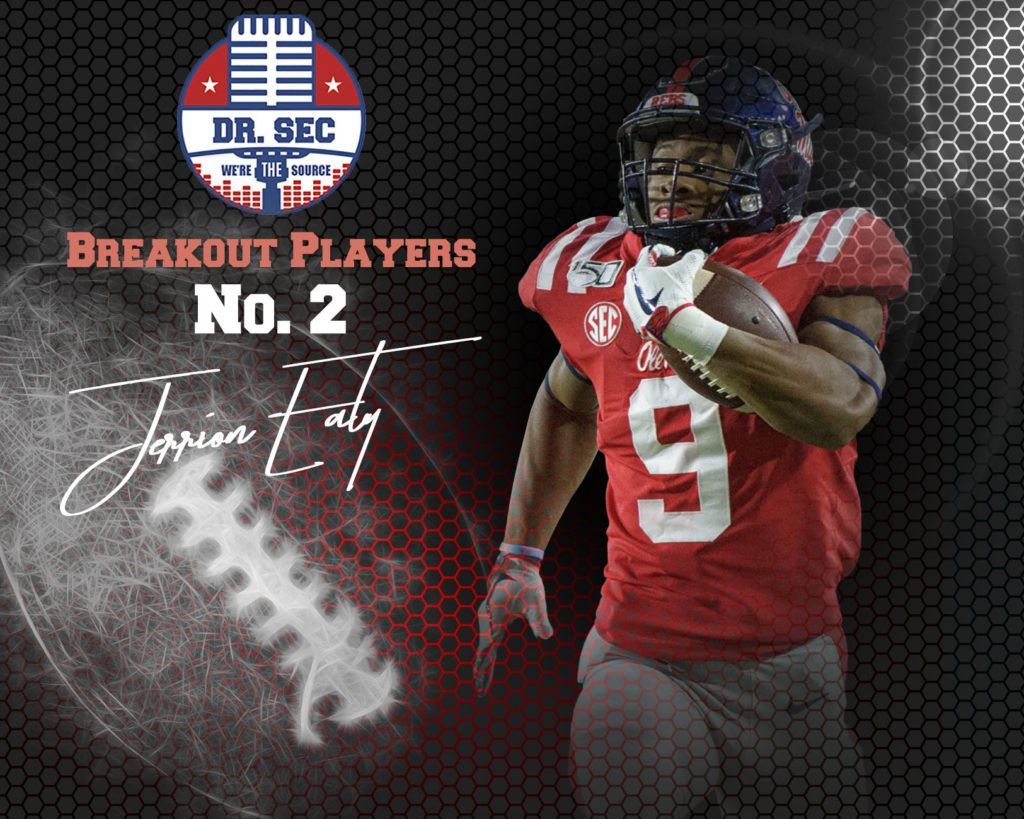 “Despite Ealy’s success, the Rebels finished the season losing five of their last six games. Lane Kiffen would replace former head coach Matt Luke at the end of the season. This should be huge for Ealy’s development as Kiffin has produced some of the top running backs in NCAA history, including Heisman Trophy winners Reggie Bush and Derrick Henry.”

“Mac Jones might be the most underrated and overlooked player in the SEC heading into the 2020 season. Many of my respected colleagues have predicted that freshman QB Bryce Young will be a breakout star, but that will not be happening this season. While Young is the most talented QB in the 2020 class and a future star, this will be Mac Jones season and could set up quite a controversy headed into the 2021 season.”

“In his four starts last season, Mac Jones threw for 1,172 yards, 13 touchdowns, and only two interceptions. In his only opportunity to start in back-to-back games, he threw for 662 yards and seven touchdowns against Auburn and Michigan on the road.” 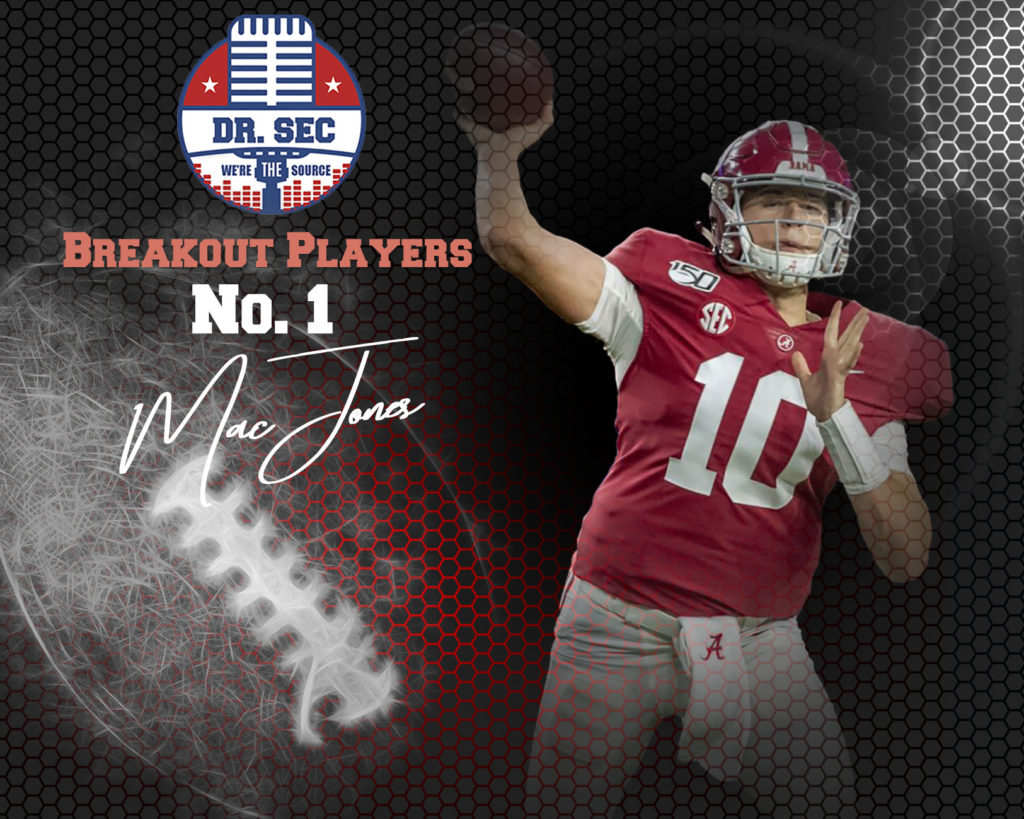