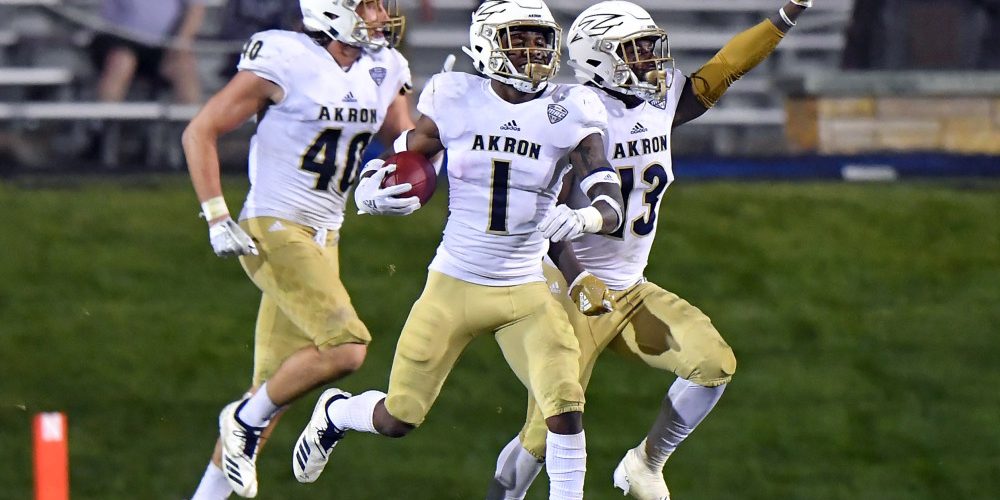 Akron’s spring practice saw some great things going down, especially from QB Kato Nelson. Sports writer and Akron expert Juney J is the go-to guy for all the details, so we had to get in touch. He told us everything he can, including who we should look out for regarding college fantasy football picks. Check out more from Juney J on Twitter @AVKingJames.

Overall, how do you believe the offense will compare to the 2018 version?

Tom Arth will likely flip that all that on its head, as Arth ran a spread option look based primarily on the pass. That isn’t a major surprise, as Arth was a former NFL QB and came up through the coaching tree as an offensive assistant or coordinator.

Now, whether that will immediately result in any positive changes or not is yet to be seen. But the optimism is certainly there, as Arth returns to his childhood home with a recruiting pedigree and active personality, two things Bowden perhaps lacked.

What do you expect from the QB position in 2019?

It’s going to be Kato Nelson and… yeah, that’s really about it. No one behind him was particularly pleasant to watch last season in relief, and generally with new regimes, you either want someone there with knowledge of the personnel or new blood that perhaps has experience elsewhere.

As Akron did not pursue a grad transfer QB, Nelson can be effectively Sharpied in as QB1. That’s for the best, as Nelson was an athletic, if merely serviceable MAC- level QB who was perhaps a bit restrained under a conservative offense. His numbers in 2018 aren’t particularly impressive at a glance (he finishes 6th or 10th in most passing stats) but could stand to benefit with more room to freelance.

It’s going to be hard to get an idea of how often the running attack will be leaned upon in Akron, and a general derth of known talent at the position certainly doesn’t help matters. Kato Nelson will also steal away plenty of running yards, being a mobile quarterback.

Deltron Sands is the returning back with the most production heading into spring camps. The Oregon State transfer picked up 39 carries for 128 yards and one touchdown along with one reception for four yards in 11 appearances.

The problem with Sands is his injury history. He’s suffered two season-ending injuries in four seasons, and has spent the majority of seasons buried in the depth chart recovering while other names have toted the rock. He’s got potential to grow, and is certainly speedy when he does, but as a fantasy pick, he’s a BYE week flier option.

There will be some intriguing freshmen to watch at the back position, including RS FR Abraham Alce (more on him later) and true sophomore Keyondre White, the latter of whom led the team in rushing against South Carolina in the final game of the season.

How does the offensive line compare to the 2018 group?

They lose a couple players, but also return four starters from last season, primarily on the left side of the line. Brandon Council returns to anchor the RT spot after missing the final nine games of the season in 2018, so that helps. The line, despite being young, will return some key experience, with 64 combined starts coming back from last season, with one senior. The big battle to watch will be at the RG, as that’s the lone spot which needs filling and there’s no readily apparent heir.

The tight end was a black hole on offense in 2018, and honestly, I’m not expecting much change on that front in 2019. Like I mentioned earlier, it’s a new offense so we’re not really going to know what the offense distribution will look like until they take the field. I’d say most of, if not all of the reception yards, will go through the receivers.

Kwadarrius Smith is gone, and that’s really too bad, but Andre Williams (46 receptions, 649 yards, 6 TD in 2018) returns as the WR1 option, which isn’t a bad consolation prize. He’s the Zips’ best returning option for big plays, averaging 14.1 YPR. The only issue was that he only caught a little over half his targets, which is bad enough as a #2 option, but will be unacceptable as a #1. (Jonah Morris, the #2 returning starter, had a catch rate of 46.4 percent. Yikes!) The rest of the current receiving corps, Morris included, had 64 receptions for 488 yards and two touchdowns, so he’s your safest bet from a fantasy perspective.

A situation to keep an eye on for the Zips is the pending transfer of Julian Hicks, a rising redshirt sophomore from Central Michigan (my alma mater.) He really came on at the end of what could charitably be described as a struggle for the Chippewas, catching three TD’s in his final four games (under four different QB’s!) and was considered CMU’s best WR option going into spring camps before his shocking transfer.

If he’s immediately eligible, he’s got three years of eligibility and will compete right away for reps in a receiving corps that’s short on game experience. His 28 receptions for 313 yards and four TD’s in 2018 would have placed him as the second-leading returner on the roster were he in Akron last season.

It’s hard to know with the new offense, but Hicks and White would be safe bets along with Andre Williams. A gamble could be placed on Abraham Alce too. At six-foot, 224 lbs., this former three-star prospect back held several Power Five offers (including Kentucky, Boston College and Wisconsin) before choosing Akron and Nate Stewart, who caught 61 percent of his targets as the fourth receiver in 2018, is in line to get more work in 2019 and has a handful of years left.