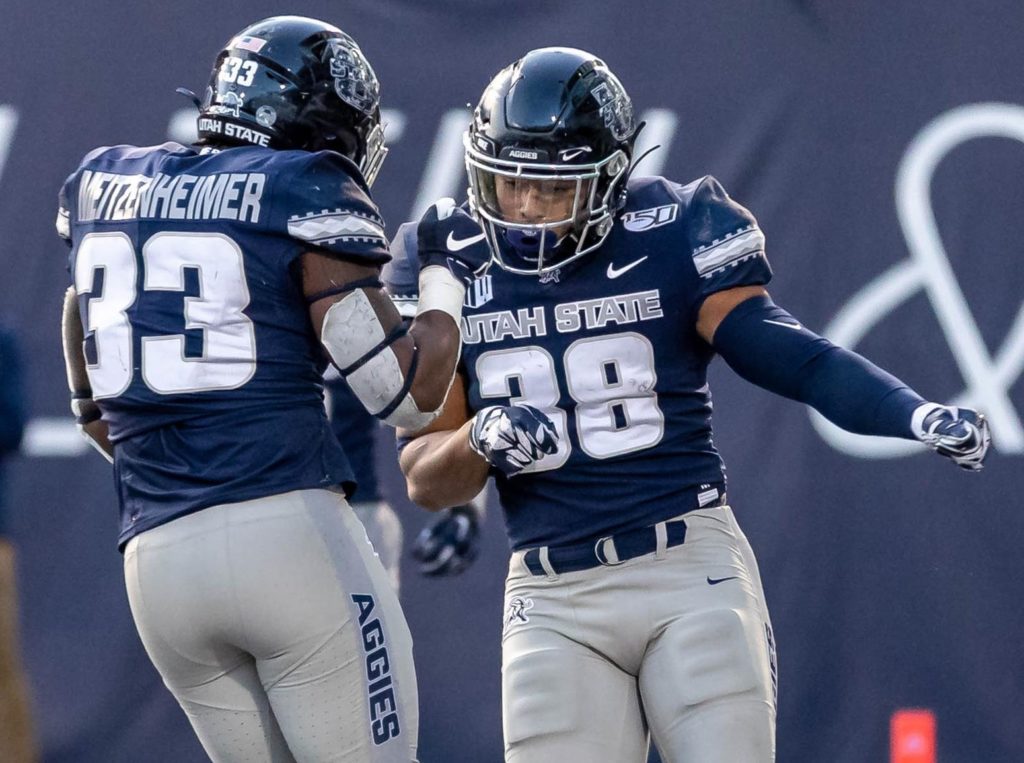 The Aggies out in Utah have officially reached “middle of the road” status. Can they take a step past their 7-6 season in 2020? Will they regress? Utah State expert Jason Turner will help us get a better look at what’s in store for Utah State.

Jason Turner is a writer for the Herald Journal, a newspaper in Logan, Utah that covers Utah State.

That is a good question. Utah State returns its entire starting offensive line, plus proven skill position players Jordan Nathan (slot receiver) and Jaylen Warren (running back), but we be without record-setting quarterback Jordan Love, who will likely be a first-round pick in the upcoming NFL Draft. Not only that, the Aggies have a new offensive coordinator in former North Texas and Eastern Washington OC Bodie Reeder. USU’s offense won’t play at breakneck speed like it did under former offensive coordinators David Yost and Mike Sanford Jr., but the Aggies will still be up-tempo. I expect the Aggies to be pretty balanced offensively as long as one of the two true freshman tailbacks — John Gentry or Elelyon Noa — emerges as a dependable 1-2 punch with Warren. Both players are talented and, I believe, will be impactful performers for the Aggies. I think the Aggies will be pretty explosive if junior college transfer Justin McGriff, who started his collegiate career at Nebraska, emerges at the wide receiver position, and dynamic playmaker Deven Thompkins continues to develop. However, USU faces a challenging schedule in 2020, so there are a lot of question marks to be answered.

The starting job of definitely Henry Colombi’s to lose. I thought the redshirt junior looked solid in mop-up duty over the previous two seasons, plus he played quite well in the second half of USU’s road victory over Hawaii in 2018. Love was injured late in the opening half of that game and Colombi played the entire second half, so meaningful minutes. This will be Colombi’s fourth year in the program, so he should be pretty comfortable. Colombi’s two primary backups, redshirt sophomore Andrew Peasley and redshirt freshman Cooper Legas, are very athletic. Peasley has blazing speed, but he blew out his knee last September. He was practicing during spring camp before the COVID-19 pandemic canceled the rest of camp. I definitely think USU’s quarterbacks will run the more than they did in the Love era.

Jaylen Warren is definitely a proven commodity. He’s a powerful runner who was the national junior college Offensive Player of the Year as a sophomore at Snow College. Warren, who is also a reliable target catching the ball out of the backfield, did persevere through some nagging injuries during his first season at USU, so I think either Gentry or Noa must emerge in order for the Aggies to have a really good rushing attack. USU lost tailback Gerold Bright to graduation, and he was an all-conference level performer as a junior and senior. His presence will surely be missed, but the Aggies should be just fine should a second tailback emerge behind Warren.

Utah State’s offensive line suffered some growing pains in 2019 because left tackle Alfred Edwards was the only returning starter. However, all five of those starters will be back this season, and I think the offensive trenches will be one of the strengths of the team. Starting right tackle Andy Koch looked very, very good at the beginning of the ’19 campaign before suffering a season-ending knee injury in Game 3 against San Diego State. I strongly feel there would have been fewer growing pains last fall had Koch stayed healthy. I believe Edwards, who dealt with some injuries last fall, and Koch have NFL potential. Redshirt freshmen O-lineman Hunter Hill and Jackson Owens have a lot of potential and will be key contributors eventually at USU.

I’ve already talked about Gentry and Noa, and I think another freshman who could be a valuable contributor immediately is linebacker Keegan Duncan, who was a 4-star recruit in high school. I watched Duncan play in high school a couple of times — he competed for a small Idaho school — and he just throttled the competition. Duncan spent the 2019 fall camp at Boise State, suffered an injury and elected to transfer. Granted, he’s a senior, but I think wideout Derek Wright is going to have a breakout season. Wright is a junior college transfer and a walk-on who saw limited playing during his first season in the program. He impresses me every time I see him practice, and it appears he has some chemistry with Colombi. The two hooked up on a gorgeous touchdown in garbage time in a game a year ago. Two other young linebackers I think are going to eventually be standouts are redshirt freshman Jaymason Willingham and sophomore AJ Vongphachanh. Whether that will be this season remains to be seen. I think sophomore tight end Bryce Mortenson might also turn some heads this upcoming season. I definitely expect McGriff to give opposing defensive backs fits with his 6-foot-6 frame.