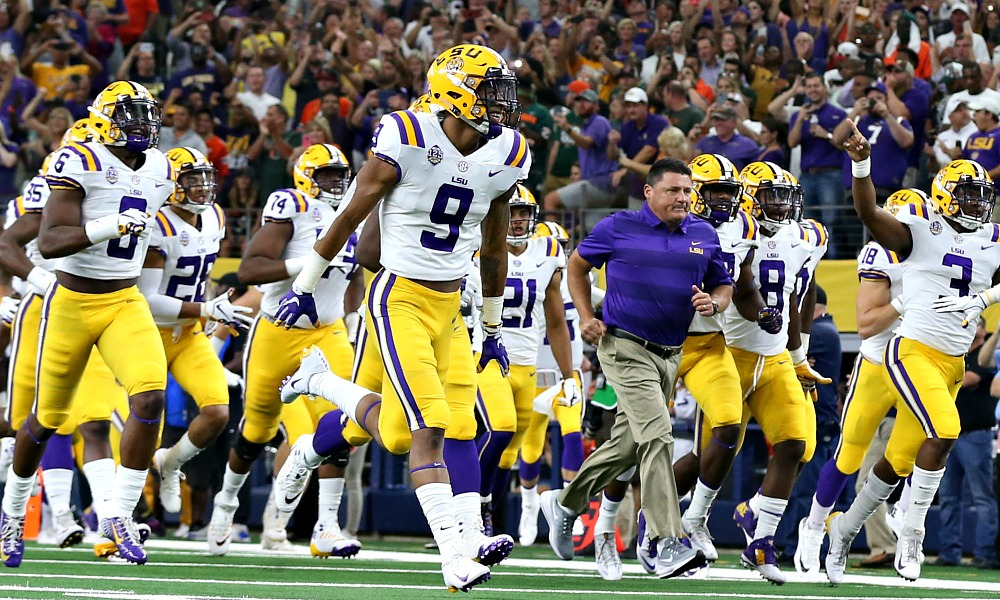 Things couldn’t have gone better for LSU last season. A perfect record (15-0) and a National Championship to top it all off. But with the loss of some players to the NFL, will LSU retain their role as CFB’s most dominant team? LSU Expert Evan Saacks will help us figure it out.

Evan Saacks is a lifelong LSU and Saints fan who writes for And The Valley Shook. He originally found his passion for writing at LSU’s student newspaper before turning to ATVS to write about the silly side of football. He graduated from LSU in May 2020 after watching the greatest college football team of all time win the National Championship in New Orleans.

Projecting an offense replacing a QB is always a difficult task, but man we have NO IDEA what to expect from next year’s offense. The biggest question mark comes from the loss of Passing Game Coordinator Phenom Joe Brady, who was so good for LSU last year he skipped being a college OC altogether and now has full control of the Carolina Panthers’ offense. Despite this, the offense will still look a lot more like the 2019 offense than the 2018 offense. Steve Ensminger enters his third year as full-time OC, and will surely retain many of the same concepts and schemes Brady brought in. But the extent to which that is true remains to be seen.

Myles Brennan will finally have full control of LSU’s offense in his fourth year on campus. After playing sparingly behind Danny Etling as a freshman in 2017, Brennan was the favorite to be the starter in 2018 before Joe Burrow transferred in May. Sitting behind Burrow for two years might’ve been the best thing to happen to Brennan. A four-star out of high school, Brennan was renowned for a big arm, but was undersized for the position. Myles Brennan Weight Watch captivated LSU fans for awhile as Brennan took on a calorie-heavy diet to get his weight over 200 pounds. LSU won enough blowouts for Brennan to see action in eight of LSU’s 15 games in 2019, granted this mostly consisted of handoffs. Nobody is expecting Brennan to be Joe Burrow, but his combination of physical traits and three years refining his game should make him a solid, reliable starter in 2020 with a sky-high limit.

Losing Burrow is the headline, but LSU has rarely relied on a single running back the way it did on Clyde Edwards-Helaire in 2019. Carries are expect to be split between redshirt sophomore Chris Curry and true sophomores John Emery Jr. and Tyrion-Davis Price. Arguments could be made for any one to be the full-time starter. Curry saw very little action his first two years and was probably a candidate for the transfer portal until he filled in for a banged up Edwards-Helaire in the Peach Bowl. Curry rushed for 90 yards on 16 carries after rushing for 101 yards on 30 carries in his entire career up to that point. Emery was a five-star recruit who came to campus with lots of hype, but never really got going. He would have had more chances to develop if LSU wasn’t running the best passing offense in college football history, so he mostly saw action during mop-up duty. His speed and strength were evident, but it seemed like he was learning to adjust to running against defenders who are also fast and strong. Leonard Fournette had a similar development his freshman year, but had more opportunities thanks to 2014’s stone age toss dive offense. Most fans expect Emery to look more like his ridiculous high school tape in 2020. The final member of the running back trio is Tyrion Davis-Price, who was mostly overshadowed by Emery as a recruit, but quickly established himself as the most solid, safest option behind Edwards-Helaire in 2019. He only ran for 295 yards but found the end zone six times, and has clear physical traits. If I had to bet on which guy is in the backfield for LSU’s first snap, TDP would probably be my pick. While Curry and Emery have incredible potential, you know exactly what you’re getting with Davis-Price: a great combination of speed and strength who will get you yards every carry.

LSU loses four out of five starters from 2019’s Joe Moore Award-winning O-line, a huge blow. The lone returning starter is senior right tackle Austin Deculus who started all but two games each of the last two seasons. A huge bonus is that LSU will also return guard Ed Ingram. Ingram started 12 of 13 games as a true freshman, but then was suspended for all of 2018 and the first four games of 2019. After re-joining the team he rotated in with Adrian Magee and started two games. Though technically not a returning starter, his skill and experience practically makes him one. Sophomore tackle Dare Rosenthal also brings a fair amount of experience with 229 snaps and three starts in 2019. The center position is expected to be occupied by Chasen Hines who saw action in eight games in 2018, but didn’t see the field as much in 2019 due to more stability among the starters. He also has the best name and jersey number combinations in college football: Hines 57. The second guard position will likely to go Kardell Thomas, a five-star freshman who missed all of 2019 with a knee injury. These five are the favorites to be the starters with Joseph Evans and Anthony Bradford also in the mix to see action at guard or center. Of all the positions with significant turnover, this one is the most critical for maintaining LSU’s 2019 offensive production. Even if Myles Brennan can’t replicate Joe Burrow’s immaculate season, his receievers are a mismatch for any defense. With big enough running holes and sufficient time in the pocket, this offense has the potential to score at will.

As if Ja’Marr Chase’s 2019 evisceration of college football’s best defensive backs wasn’t enough, he returns for another year. The reigning Biletnikoff winner will don LSU’s iconic No. 7 jersey in 2020 as he attempts to repeat his claim as college football’s best wide receiver. While defenses will focus most of their attention on him, Terrace Marshall Jr. also hopes to build on a stellar sophomore campaign. Marshall caught 46 balls and 13 touchdowns in 2019 despite missing three games with injury. Not bad for LSU;s third wide receiver. Now the clear-cut second option, the 6-foot-4 Marshall should be a nightmare match-up for many corners. After the two stars Brennan’s options will likely be senior Racey McMatch and sophomore Trey Palmer. The 6-3 220-pound McMath switched back and forth between receiver and tight end his first few years until 2019’s spread offense made the different not really matter. He had a promising 2019 with 17 catches and three touchdowns, including Brennan’s lone score of the 2019 season. Palmer is a shifty receiver who would have seen more action had the depth chart not been so loaded in 2019. He only caught one pass but did return a punt 54 yards for a score against Northwestern State. As for tight end, senior Jamal Pettigrew will see plenty of action in his fifth year on the team, but he will certainly split time with true freshman Arik Gilbert, one of the highest-rated tight ends ever by recruiting sites. Junior Tory Carter is still listed as a fullback on LSUsports.net’s roster, but the overhaul to the 2019 offense basically killed the position, so most of his non-special teams action comes at tight end where he saw a handful of snaps last year.

I think McMath has sneaky potential to be a real threat this year. As LSU’s fifth wide receiver, he always saw a handful of action each game, but was never Burrow’s first option. But whenever Myles Brennan came in for mop-up duty, McMath was the No.1 guy. His solid combination of size and speed makes him someone defenses can forget about with their focus on Chase, Marshall, Gilbert, or whichever running back is in the game.