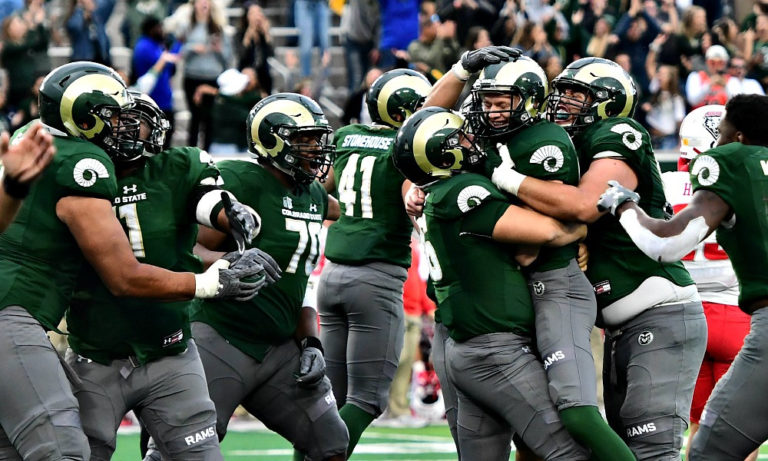 It’s a rough time to be a Colorado State fan. With a more than disappointing 4-8 finish in 2019, there were few things to see as positives going into this next year. However, there may be more than meets the eye. Expert Joel Cantalamessa will help us figure out what exactly is happening out in Colorado.

Joel Cantalamessa is the Founder of RamNation.com, a site devoted to all things Colorado State.

Former CSU head coach (and playcaller) Mike Bobo is often regarded as an offensive genius. However, his offenses didn't translate into enough wins, and thus he was fired following the 2019 season. The Rams's offense in 2019 wasn't all that prolific either, ranking in the bottom half of scoring offenses, and a lot of that had to do with an inefficient running game and a change at quarterback four games into the season due to an injury to starter, Collin Hill. Former Nebraska quarterback transfer Patrick O'Brien took the reigns and performed admirably, but the offense was limited due to his inexperience and lesser knowledge of the playbook. The team, as was the case during most of Bobo's tenure, was also plagued by turnovers and penalties in 2019. Combined with the inability to run the ball consistently, the offense. In 2020, Steve Addazio enters as head coach. He is known as more of a CEO than Bobo was, whose focus -- to a fault -- was on the offensive side of the ball. Addazio is expected to emphasize more toughness and discipline to the team, which has been sorely lacking. Ranking near the bottom of the Mountain West in turnovers and penalties will likely get corrected. In addition, Addazio is also offensive-line oriented, which the program has a solid history of -- just not under Bobo. However, CSU lost three lineman this offseason -- one to graduation (Jeff Taylor) and two to transfers (T.J. Storment and Nouredin Nouili). Ram fans are clinging to hope that the offensive line whisperer Addazio, and his son Louis Addazio (who is the actual offensive line coach) can quickly mold the remaining group into shape. However, it was an average unit in 2019 and may struggle to equal that in 2020. The offense has some legitimate weapons in senior receiver Warren Jackson (who will be the next NFL wideout from CSU), sophomore slot receiver/all-purpose weapon Dante Wright (who earned Freshman All-American honors in 2019), senior wide receiver Nate Craig-Myers (former Auburn transfer), and junior tight end Trey McBride (who is destined for the NFL himself). Senior running back Marcus McElroy is the likely top running back with sophomores Jaylen Thomas and Christian Hunter (one of four players in California prep history to surpass 4,000 yards rushing) each getting carries. But without an experienced cohesive offensive line unit to protect O'Brien or create running lanes, offensive production may struggle, at least early in the season.

Patrick O'Brien handled himself well in 2019 following Collin Hill's injury. Bobo had to pare down the playbook a bit, but O'Brien showed poise and an ability to make plays. CSU went 3-6 with O'Brien as a starter, but there were no games where you'd point at hi as the reason for a loss. He completed 209 of 338 passes for 2803 yards, with 13 TDS and 7 interceptons. In his debut start vs. Toledo in Week 4, he completed 32-of-52 passes for 405 yards and a touchdown. He hit the 300-yard mark in four games. He has a plethora of receiving weapons at his disposal. The question is, will he have a supporting rushing game and protective offensive line? The other big question is, he will be learning his second playbook in as many seasons, as former Ball State offensive coordinator Joey Lynch takes over the same role at CSU this year. O'Brien fell behind Hill in the battle for starting quarterback in 2019 due to not being as familiar with the playbook. Ram fans hope he can catch on sooner this year, particularly with the quarantine giving him time to immerse himself.

Addazio has been known as a run-oriented coach. It will be interesting to see how new offensive coordinator Joey Lynch adheres to that mold. Lynch has said he plans to get the ball in the hands of his playmakers as much as possible. Still, expect a solid running game to be the foundation of this program in the coming years. Whether CSU has the horses up front or the playmakers in the backfield in 2020 remains to be seen. McElroy will get a solid shot to be the starter, but following the departures/dismissal of two talented running backs last year, Marvin Kinsey and Rashaad Boddie, nobody has stepped up to be "the guy". Hunter and Thomas will share in what will likely be a "running back by committee" situation until someone breaks out. True freshman Kyjuan Herndon from Jacksonville, Fla. has a chance to break into the mix.

The Rams return two starters -- 6-3, 300-lb senior center Scott Brooks, who started every game as a junior, and junior Barry Wesley who has made 24 consecutive starts (played right tackle and left guard in 2019). The unit will be hurt by key losses in Jeff Taylor, who graduated, and T.J. Storment and Nouredin Nouili who both transferred following the coaching change. The Rams were low in offensive line roster members -- something Addazio has tried to address in the 2020 recruiting and 2021 recruiting classes so far. But with the attrition and inexperience of this 2020 unit, this could be a weakness of the team, at least early in the season.

Warren Jackson and more Warren Jackson. The 6-6, 215-lb senior wideout will be the next CSU wideout to come out of CSU (following Rashard Higgins, Michael Gallup, Olabisi Johnson, and Preston Williams). Jackson was a first-team All-Mountain West selection after leading the team with 77 catches for 1,119 yards and eight touchdowns last year. He ranked third in receptions as a sophomore, and played in all 13 games as a freshman. He is a star. Sophomore Dante Wright is the next-greatest weapon, often used in the slot or in the backfield on sweeps and end-arounds. He has speed an a knack to get open and score. Bobo's offense was very creative in getting him the ball. It will be interesting to see how Joey Lynch utilizes his new weapon. Wideout Nate Craig-Myers sat out the first three games of the 2019 campaign as part of NCAA transfer rules after transferrig from Auburn, and was a somewhat under-utilized weapon in 2019. But Craig-Myers has the physical tools and most expect him to have a big senior season this year. Senior E.J. Scott should see plenty of targets as well. CSU has two very good tight ends in senior Cameron Butler (6-2, 250) and junior Trey McBride (6-4, 260), both of whom are expected to be targeted heavily in this new offense. Butler missed much of the 2019 due to injury but as a sophomore in 2018 ranked fourth on the team, and first among tight ends, with career-high 29 receptions for 312 yards in 2018. McBride is a sure-fire NFL player who was a first-team All-Mountain West selection as a sophomore in 2019, nabbing 45 catches for 560 yards and four touchdowns. He will be one of O'Brien's go-to weapons. The Rams also are expected to have 6-6, 240-lb transfer Brian Polendey, spent three seasons as Hurricane and will be eligible to compete immediately with two seasons remaining.

Dante Wright is your guy, although after a huge freshman season, he's not flying under the radar. Running back Kyjuan Herndon, who had offers from Ole Miss, Maryland, Cincinnati, and Bowling Green, will compete for playing time as a true freshman.