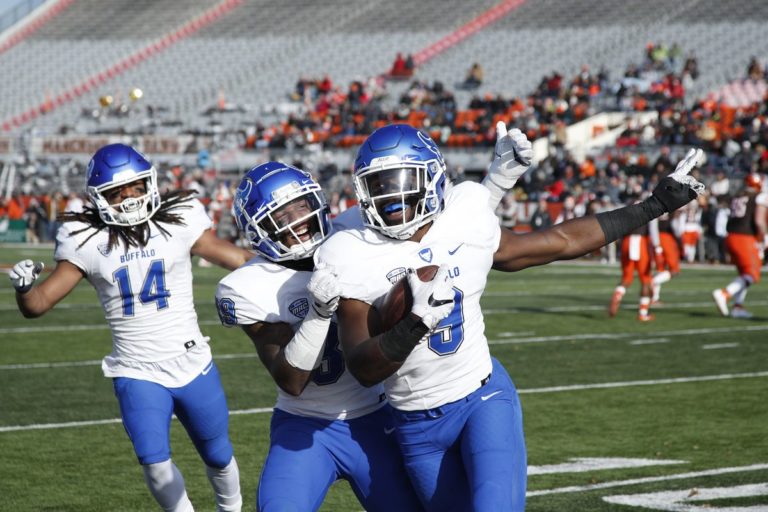 An 8-5 finish isn’t too shabby – and Buffalo fans certainly didn’t disagree. With some of the first signs of success heading Buffalo’s way, there’s a lot of excitement surrounding the team. Can they keep it up in 2020? Expert Rachel Lenzi will let us know.

Rachel Lenzi is a writer for Buffalo News, a newspaper located in Buffalo, NY.

The offense set a high bar last season -- particularly the running game, with two 1,000-yard rushers in Jaret Patterson and Kevin Marks - but the Bulls have to strike more balance between their rushing and passing game. They lost starting quarterback Matt Myers to a season-ending injury five games into the season, and really leaned on their running game, even with Kyle Vantrease at quarterback. Vantrease threw for 1,193 yards and eight touchdowns (while doubling as UB’s punter for a short stretch), but the show was clearly Patterson, who set program and Mid-American Conference rushing records as a sophomore.

After Myers sustained a season-ending injury in September, Vantrease stepped in and played formidably, and led UB to the program’s first bowl win. UB has a tough decision to make for its starting quarterback: Myers, who is proficient in the run-pass option but who only has a small sample size as a redshirt freshman (49-for-104 passing, four interceptions, six touchdowns, 602 yards) and still needs time to prove himself, as well as fully recover from a season-ending injury, or Vantrease, who helped the offense maximize its production in UB's final eight games. UB is also deep at quarterback, with redshirt freshman Trevor Bycznski and freshman Casey Case.

There's no question Jaret Patterson is the bell cow back in this offense, and he’ll continue to be the primary running back, barring any injuries, after he ran for 1,799 yards and 19 touchdowns in 2019 – the most productive season by a running back in UB’s history as an FBS program. Marks has been a formidable reinforcement, as well, and consider that only three FBS programs in the country last season had two backs with at least 1,000 yards rushing: Buffalo, Oklahoma and Central Michigan.

The Bulls lose a chunk of their offensive line to graduation: left tackle Evin Ksiezarczyk and guards Paul Nosworthy and Tomas Jack-Kurdyla. UB has to replenish its offensive line, especially if it Patterson and Marks aim to continue their productivity, and the Bulls must protect their quarterback. The offensive line in 2019 allowed a Mid-American Conference-low eight sacks (also second in the nation), including one sack in UB’s final eight games.

This is also an area where UB has to find more balance. Early in the season, the tight ends seemed to be Matt Myers' preferred targets, particularly as WR Antonio Nunn recovered from an injury. The wide receivers came into the fold more and more as the season went on, and gained much-needed experience, as UB lost several of their big targets from 2018, including KJ Osborn and Tyler Mabry. But UB returns a more experienced corps of wide receivers, led by Nunn and Daniel Lee, a junior-college transfer.