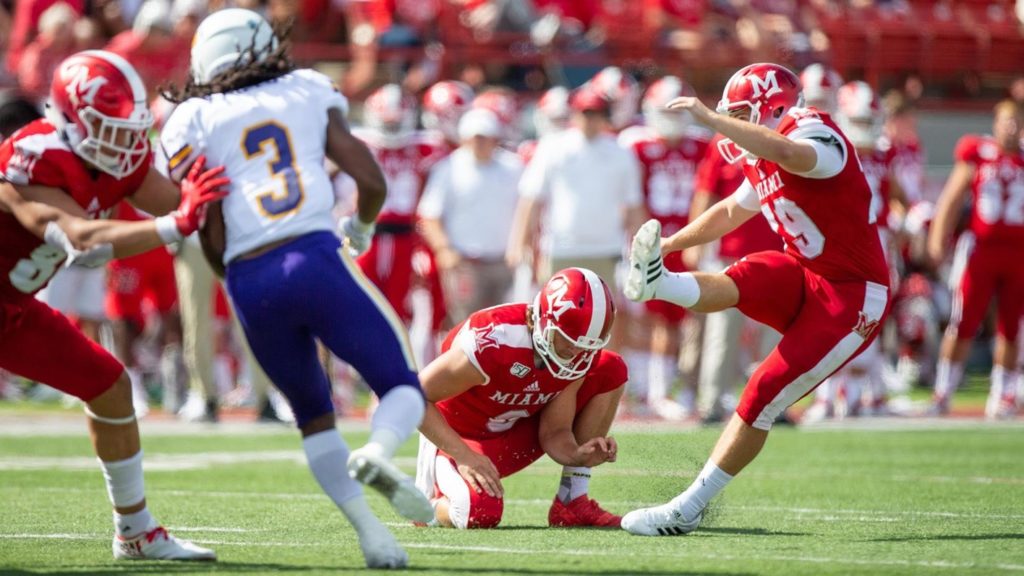 It was an OK year out in Miami (OH) last year. They finished 8-6 on a pretty tough schedule that included Ohio State and Iowa, to name a few. Will 2020 be the time that Miami breaks out onto the scene? Expert Steve Helwick will tell us all about it.

Miami’s offense should improve in 2020 considering the wealth of offensive production coming back to campus. Starting quarterback Brett Gabbert returns after an impressive true freshman campaign in which he started 14 games and won a MAC Championship, and he’ll only get better after a year of easing into the college game under his belt. Running backs Jaylon Bester and Tyre Shelton combined for nearly 1,500 yards of scrimmage a year ago, and the RedHawks return their four leading receivers, so Gabbert will be working with similar targets at the skill positions. On the offensive line, left tackle Tommy Doyle and center Danny Godlevske will bolster the unit, but Miami must replace the two departed seniors on the right side of the line. Overall, Chuck Martin will boast one of the offenses with the most returning production for 2020, which is always a bonus for a team coming off a conference championship season.

Brett Gabbert, the younger brother of former Missouri QB and NFL first-round pick Blaine Gabbert, unexpectedly prevailed in a three-way battle over A.J. Mayer and Jackson Williamson for the starting job last offseason. He became Miami’s first-ever true freshman quarterback to start the opener, and Gabbert was poised enough to keep the job after a brutal non-conference schedule which included road games at Iowa, Cincinnati, and Ohio State. Overall, he looked very comfortable in the pocket as the season progressed, and he launches an impressive deep ball. His accuracy wasn’t always perfect in 2019, but that should be expected of quarterbacks fresh out of high school. But he improved on that mark, culminating in completing 71% of his passes for 248 yards and a touchdown in the LendingTree Bowl. Despite the loss, that remains Gabbert’s best overall game as a passer, and Miami will hope to use that game as a launching pad for the soon-to-be-sophomore in 2020.

The backfield will remain the two-headed force of Jaylon Bester and Tyre Shelton. Bester, an incoming senior, received about 61% of the carries in 2019 of the duo, while Shelton handled the other 39%. Bester led the RedHawks with a team-best 741 rushing yards, and he was a dangerous weapon in short-yardage situations. Miami frequently utilized him near the goal line and he capitalized with 14 of the RedHawks’ 22 total rushing touchdowns last season. Shelton recorded 587 yards on 5.4 yards per carry last year, and he will likely serve as a viable secondary back once again as a sophomore.

Left tackle Tommy Doyle and center Danny Godlevske were the best players on Miami’s 2019 offensive line and both linemen will have another go-around manning the trenches in Oxford. Doyle landed a First Team All-MAC selection last December, and he’ll be the primary draft prospect to watch on the RedHawks this coming season. With a 6’8”, 326-pound frame, Doyle uses his size to his advantage and excels as a powerful run blocker. Godlevske also achieved All-MAC honors as a Third Team honoree from the center position. The line loses seniors Jarrett LaRubbio and Matt Skibinski, the right guard and right tackle from the 2019 team. Out of all offensive position groups, the line features the highest turnover, but having two of the conference’s best run blockers at left tackle and center should make this a formidable unit going forward.

The RedHawks are fortunate to return each of their four top wideouts from 2019, and Miami boasts the best tight end in the MAC heading into 2020. Wide receiver Jack Sorenson, the MVP of the MAC Championship, led the balanced unit with 568 yards as a junior. He owns the most reliable set of hands on the offense, but Miami also presents a dangerous deep threat in its receiving corps. James Maye was outstanding at gaining separation from defenders last fall, as he caught 20 passes and averaged over 25 yards per reception in a standout freshman campaign. Sorenson and Maye accounted for over 1,000 yards of production, but experienced receivers Jalen Walker and Dominique Robinson will operate as other capable targets for Gabbert. Tight ends are frequently utilized in Chuck Martin’s offenses, and Andrew Homer serves as a strong blocker and solid red zone threat, catching 26 passes for 357 yards and five touchdowns in the past two seasons combined.

James Maye strikes me as Miami’s primary breakout player entering the 2020 season. He seamlessly adjusted to the FBS level and is instrumental in creating home-run plays on the RedHawks’ offense. With breakaway speed and an astronomical yards per reception average, he’ll frequently burn defenders en route to long touchdowns in the future. With Maye and his quarterback Gabbert entering their sophomore years, experience and familiarity with the game should factor in and both should see an increase in production heading forward.